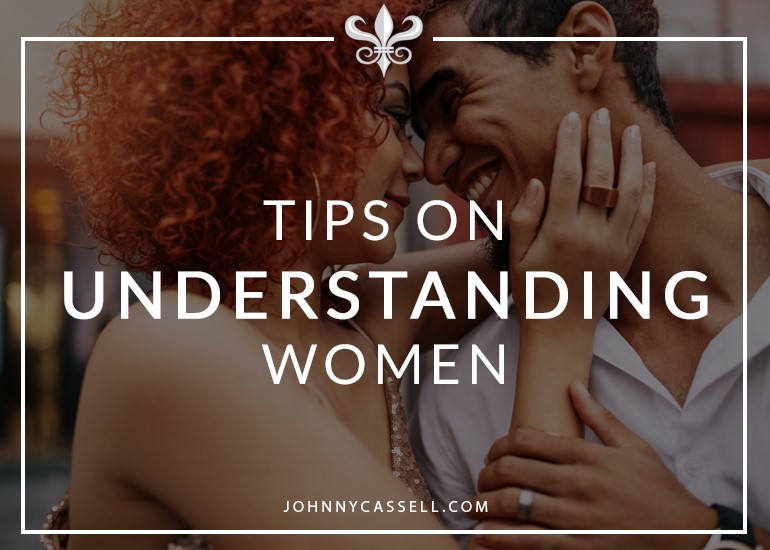 I’m using today’s blog post to talk about a topic that the majority of men equate to quantum physics or rocket science – understanding women.

Men have been trying and failing to understand women since they came into existence. A lot of the time, it’s because men are letting their own needs interfere with their understanding of the opposite sex.

It helps to understand women when entering the world of dating, both when trying to pick up signals that they like you and managing relationships when you do find that special someone.

Working out what makes a woman tick comes down to nothing more complicated than knowing about human behaviour.

It’s impossible to jot down a full list of characteristics that typify a woman’s behaviour patterns. Every woman is different, and if you know any one woman for long enough, you’ll learn about her quirks – and how to get to grips with them.

However, there are some important factors to know when considering the often-thorny issue of understanding women, and they do apply across the board.

How to understand women better

One of the key things to remember about any woman you approach, or go on to date, is that they will always be testing you. Your reaction, or willingness to take the lead, will be under the magnifying glass constantly. This will come across in their behaviour.

Women will often make statements that are at odds with what they actually want or need in order to gauge your response. However, if you think this is a woman’s way of being difficult, irrational, or self-contradictory, think again – you’re being tested.

The classic is a half-hearted “I’m fine,” when she clearly is not. She wants you to probe deeper, to actively invest time and attention in her, and to have an open discussion.

If a woman says, “We should break up,” she’s checking to see how into her you really are. She doesn’t actually want to break up with you – she’s pushing you to prove to her that you think she’s special.

Likewise, when a woman offers to split the bill on a first date, she doesn’t actually want to pay for dinner. She wants you to prove that you’re willing to look after her and provide security.

Once you’ve got to the root of whatever is bothering a woman, the only thing you need to do is this: Listen.

Men can claim to understand women when they stop trying to fix their problems, and simply spend time paying attention to a woman while she opens up to a man about what’s affecting her.

Empathise, don’t sympathise. Women don’t want to feel pitied or infantilised; they want you to put yourself in their shoes for five seconds and acknowledge that whatever sucks for them really does suck.

If you try and fix all of their problems immediately, it feels to them like you consider their difficulties to be trivial or unimportant.

Men often don’t understand these signals but recognising them can be the key to a successful approach.

So many men that take part in my 7-Day Course tell me they were attracted to my teaching because they struggle to pick up on female signs of attraction.

If a woman looks at you and then looks away or looks down, she likes you, but she’s shy – especially if she looks back up again. A woman is never just looking over at you. She’s interested and wants you to go over and talk to her.

If you notice a girl who’s part of a group that proceeds to move to the seat or booth next to you, they’re trying to make it as easy as possible for you to open up a conversation.

You might even find that a woman with whom you strike up a notable spark will start becoming confrontational or sassy during the interaction. You might meet with some pretty heavy resistance when talking to a woman for the first time.

This is because a woman will challenge you when they’re interested. They want to see that you’ve got the goods and are man enough to take any challenge that comes your way.

How to understand women: What do women really want?

This is where men and women aren’t so dissimilar.

On a long-term basis, both sexes are looking for paternal/maternal characteristics. People seek out potential long-term partners with reliable, consistent qualities that are great for starting a family and creating a viable future.

Women and men will seek excitement for the first part of their lives, then look for security throughout the next.

A successful relationship is about trying to understand what people want from courtship, not just women.

If you’re dismissing a woman’s behaviour as irrational or abrasive, take a moment, reflect, and ask why you’re experiencing this attitude.

Is it something you’ve actually done? Are you simply over complicating a pretty standard reaction from a woman? Have you been communicating properly?

These are all factors to bear in mind when piecing together how women work.

For more information on both understanding and seducing women, get in touch my team about a 7-Day Course at www.johnnycassell.com/exclusive-training.