How to talk about yourself without bragging 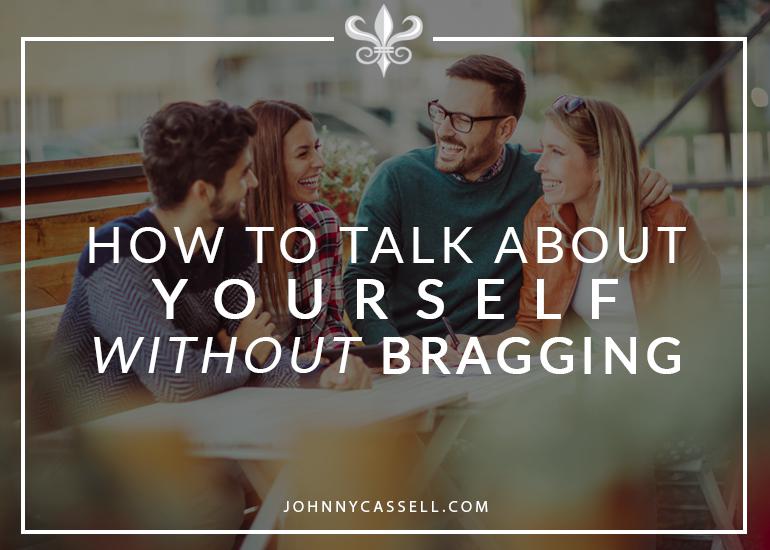 I tell this to students and readers across all of my teachings: Everyone’s favourite topic of conversation is themselves. They often respond with “I don’t know how to talk about myself.”

No matter how much you encourage a person to discuss their life by using open questions, you will end up needing to know how to talk yourself up.

Success has a foundation in successful branding. You need to be able to demonstrate your finer qualities without rubbing someone’s face in it. No one likes a braggart. But you’ll also miss out on opportunities if you don’t paint the best picture of yourself.

Did you ever buy a product that failed to demonstrate to you exactly why it would be useful or desirable in your life? Of course not. Every product you’ve ever purchased had a way of perking up your interest and selling itself to you, whether you knew it or not.

You are no different when placed into a social context. So what’s the balance?

Many of my articles are about dating directly, but there are elements of my conent that can speak to every other part of your life. This article will break down how to talk about yourself without coming across as self-obsessed.

Demonstrating what makes you great is not a crime.

Miss out on doing it in an interview, you might not get the job. Forget to do it at a bar when talking to a girl, you could find yourself missing out on some brilliant opportunities to make a connection and stand out from the crowd.

To an extreme, if you’re coy about introducing skills, achievements, and personal attributes to people, they may even feel you have something to hide. Likewise, people who brag too much are often overcompensating for shortfalls in character.

Here are some examples of bragging:

You all know at least one person who talk like this, right? It comes across as completely obnoxious and mostly false. You not only have to learn how to describe yourself without sounding conceited, you also have to pick what you talk about in a positive light.

Money and sex are nobody else’s business, and boasting about violence never makes you look big.

After the advent of social media, people are used to sharing even the most mundane aspects of their lives. However, it’s the proportion you put to use in casual conversation that ends up important.

You should be inviting the other party in the conversation to share information for 60% of the time.

Also, sharing the basic information without expanding or illustrating what this particular tidbit – say, a job you love and about which you are passionate – adds to you life or personality. Instead of saying:

“I’ve been an investment broker for x years, and it’s been super rewarding. It can get stressful, but I get to travel a lot. I was in Dubai just last week – have you been abroad recently?”

This method of providing information and then directly using it to springboard into what’s interesting about them keeps what you’re saying relatable and allows you to talk about yourself, all the while giving an exact picture of what makes you YOU.

Attaching your job, passion, or general awesome to the idea of seeking joy in life means that you also attach positive emotion to whatever it is you’re doing. People may be less invested in the stories of others than their own, but anyone can relate to emotion.

Telling stories about yourself

If you’re deep enough into a conversation, you’ll end up relating anecdotes from your life to information they’ve provided – a funny incident from a place you’ve both been, perhaps. Something shocking that happened at work, or a great night out on holiday.

Any story you tell, and the quantity of information you give, will need to be carefully considered. You’re relaying these stories to create an impression of yourself as a particular type of person.

Think of all the hijinks you hear about from the guy at the pub, and compare those with the flighty tales of travel and commerce from your colleague in the boardroom. They’re told with a distinct brand in mind. Often, you don’t end up saying “I’m a prolific guitar player” outright. You’ll frame it as “this hilarious thing happened at a gig the other night…” But, really, you’re still saying you’re a prolific guitar player.

Even better is regaling people with embarrassing stories from these contexts. The events we’d rather forget often the funniest parts of life to people to whom they didn’t happen, and humour is an incredible connector.

One of my clients used an amazing story from his time as a ski instructor. Once he’d built up enough rapport, he used to tell women how he once soiled himself on the slopes. This says that he’s confident enough to laugh about embarrassing incidents, that he used to be a ski instructor, and that he’s active and well-travelled as a person.

That’s a strong impression for a story about shitting yourself.

The power of anecdotes is real. You hear them everywhere. You might be asking how to talk about yourself without bragging, but what you really need to be asking is “what has happened in my life that other people can hook into?”

The simplest and most important trick to talk about yourself in the right way and for the right amount of time is to be genuinely curious about other people.

If you’re going out to have fun and meet interesting folk, you’ll find yourself automatically wanting to know more about them and limiting the urge to over-share or brag.

Learn to smash your conversational boundaries on my 7-Day Programme. Find out more at www.johnnycassell.com/pua-training