Johnny Cassell and Jack McEvoy: The “Vikings” Actor Talks Us Through Overcoming Rejections 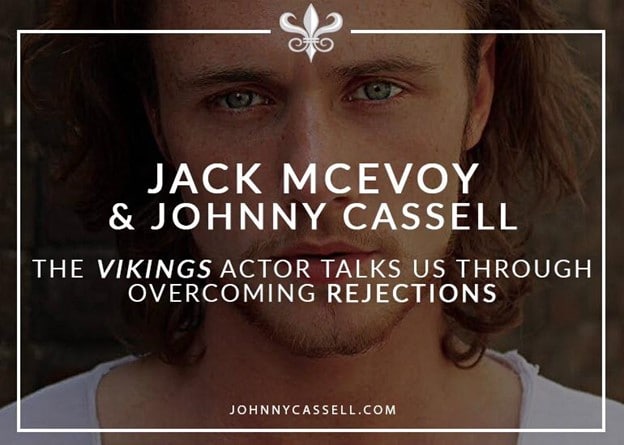 This week, we’re taking a longboat all the way to helpful, confidence-building guidance with our guest Jack McEvoy.

The approach of professional actors to their craft can teach people a lot about developing self, confidence, and a brand.

A lesson I always impart to my students is about how to reframe their idea of rejection into a positive event. When you’re getting ready for a night out, getting in the right mindset is as important as it would be for a lead actor about to nail Hamlet’s major speech.

Jack’s a warm soul and a young, successful guy with a lot of advice to offer. For these reasons, I’m delighted to have him on the show to talk to you.

Who is Jack McEvoy?

You may know this Irish actor as Helgi the Lean from the hit Amazon show Vikings.

At 26 years old, he’s only just making his mark on the world of drama, but he’s already had one hell of a journey and it’s not looking like he’s about to stop anytime soon.

Aside from Vikings, his IMDB profile boasts feature films, such as South of Hope Street, The Rhythm Section, and End of Sentence, as well as the short film The Running Man.

He’s also had extended stints in theatres across Ireland.

What you can learn from this episode

Seeing others at the peak of their momentum is an inspiring thing. But it’s also important to learn that, actually, it’s not all as simple as nailing your first audition and going from there.

As with socialising, there’s a huge emphasis on getting over the negative connotations of rejection. A successful acting career takes a lot of grit, positivity, talent, and a willingness to learn and grow.

Those are all values I wholeheartedly champion, and I invited Jack to share his perspectives from a good few years in the TV and theatre industries.

On this episode, you’ll learn:

Don’t spend your time dating waiting in the wings – become the star of your own show and build the confidence that accompanies such an achievement.

Learn how to master your self-esteem and inspire memorable conversations with my Impactful Connection workshops.