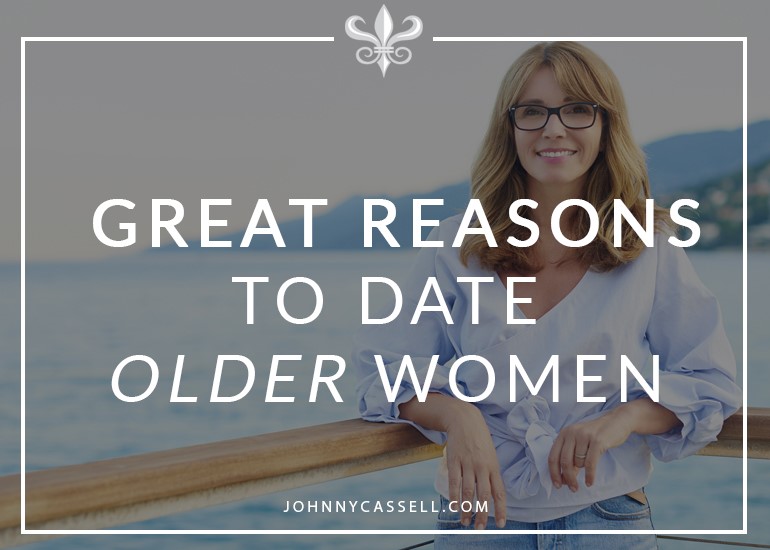 Dating women the same age as you may appear to be the done thing. But don’t dismiss older women when you’re out in the dating world.

There are some great reasons why they present a worthy challenge when you’re making approaches.

I’m going to walk you through the best parts of dating an older woman, and also what to do once you’ve decided to step into that world.

There are a few fantastic qualities that women develop over time. Every woman is different – some younger women may be surprisingly mature for their age, and some older women can be just as immature as the women you dated in your teens.

However, in my experience, these are the three key bonuses. When it comes to the older woman, dating can reach a different level.

She’s probably grown out of the insecurities a 23-year-old may be going through.

An older woman has been through her crap. You’re just dealing with a more emotionally mature woman. She’s had her fair share of relationships, maybe even marriages, and she’s likely to be more advanced in her career.

It’s important to me. Confidence and maturity are values I hold in high regard. I’m an old soul – to be honest, my work requires it of me. My primary qualification is the emotional intelligence to step into the mindset of many ages and nationalities.

I have to date a woman that thinks the same way.

Older women know what they want in the bedroom.

In the process of shedding their insecurities, she will have tried a whole range of experiences and really discovered her body and desires. Don’t be scared to show her some new experiences.

With an older woman, you won’t have to shrug off the extra-spicy stuff just because you think she may already have done it. You can actually go there.

In the bedroom especially, an older woman wants to feel young again. The feeling of being the guy that gets to do it is hugely rewarding.

She is great at establishing connection and rapport.

My girlfriend is a few years older than me, and it’s barely noticeable because of our connection.

The age difference is only a factor if you make it one. I tend to draw the line at 10/20 years older, but it’s honestly about whatever you’re into. Play on the taboo. You get to own being the younger guy.

That enhanced emotional intelligence is an excellent tool for building rapport. She may come to understand you better than a young woman, and in less time. She will just have become better at reading people over time.

The next question is: What do older women like?

How to date an older woman

Approaching older women can seem like a daunting task. Do older woman like younger men? The question comes up often from the clients on my 7-Day Course.

If you like older women but think you’ll be too young, know this: Older women LOVE younger guys. There is something beautiful about making her feel young again. YOU get to be the catch. It’s actually her that feels as if you are out of reach.

As part of my approach for older women, I used to say, “I can understand if my age intimidates you.” It’s such a great thing to work in.

She wants to flip it on you and is expecting her age to be intimidating, but when you turn that expectation on its head, you become the catch. You can head on over to the bingo hall and try it out tonight.

Here are a couple of points to bear in mind:

Just because you’re younger, it doesn’t mean you have to act the boy.

She still wants a man. She doesn’t want to mother you – quite the opposite, in fact. As I’ve said, you get to make her feel young again, so you have to lead as you would in an encounter with any other girl. Make it exciting and refreshing.

Don’t let her take the lead just because she’s older.

Gauge how she is with your friendship group.

She doesn’t want a silly guy who has his buddies over playing PlayStation every night. Separate those worlds. She still wants you to exhibit an air of class and distinction.

Maybe you have some friends who are a bit more borderline, or respectable until they get a drink in them. You’ll know how it’s going once the conversation’s rolling, so read the situation and have an exit strategy if they start setting a vibe you don’t like.

Some people she’ll get along with, and some people she won’t. There’s no problem with that. But you should be open-minded and have older friends too. Organise a dinner party and make sure that you’re the dumbest person at the table. Your friends are your friends, but may need to reach out classier people if you’re looking to impress a more sophisticated woman.

Make older friends, too. The great thing about older women and friends is getting to be around people from whom you can learn.

My world-renowned 7-Day Course can help you connect with women, wherever you are, whatever age you prefer. Discover more at www.johnnycassell.com/pua-training.