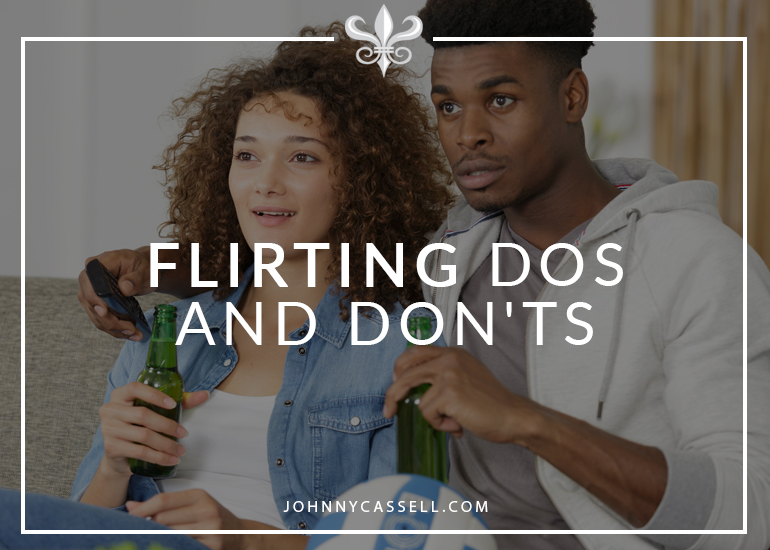 I’ve had quite a few messages asking me to break down an easy list of flirting dos and don’ts.

While I’m going to do my best to distil the core aspects of effective flirting into an easy bulleted list, you have to enter flirty encounters with a solid foundation in confidence and conversational skills before you can make the most of the moment.

These are going to be useful as a loose framework for starting out and practicing, but be sure to remember other hallmarks of attractiveness, like good personal grooming, confident posture, and smart, tasteful clothing.

The point I’m making is this: Don’t see this as a cheat sheet. Bearing these aspects of flirting in mind is no replacement for practice and experience.

Join me for the must-includes and faux pas of flirty contact.

Do make use of ambiguous language

Plenty of innuendo, humour, and wordplay is built around ambiguous language, so use it to your advantage.

One thing I love to do when flirting with a girl is deliberately misunderstanding a sentence she’s said to me and twisting it to mean something risqué. I’ll act like she’s moving too fast and tell her to calm down.

This kind of interaction elicits a laugh, sure, but its real power is in bringing sexual overtones to the conversation and opening the door to the next level of flirting.

Another key to skillful flirting is talking like you care about what you’re saying.

Before you’re putting sexual thoughts in her mind, you have to be able to engage her attention throughout the conversation. Animated speech that shows you’re passionate about the subjects you choose to bring up is captivating and invites people into your wave of enthusiasm.

While you need to be able to tone it down later when proceedings get intimate, you have to make your conversations live and come across as warm and positive to reach that point.

Real confidence is being to set out your stall in the knowledge that if you get shown the door, you know that it was with the full awareness of what you were after. This confidence is sexy and clears the air instantly. If she’s still talking to you five minutes later, you can tell she’s at least curious.

You have to make your intentions clear when approaching a woman. Starting with a compliment can show that you find her attractive, spread positive emotions, and open a route into fluid conversation.

Failing to do so can place you squarely in the dreaded friend zone, eking out a fake friendship to cover the fact that, in reality, you are attracted to her but weren’t forthcoming enough when you met.

Eye contact is hugely powerful and one of the primary communicators we have as humans. We say more with our eyes than we do with our words in a conversation.

Prolonged eye contact also when people are at their most vulnerable. As our eyes will always betray the emotions we’re genuinely experiencing, even if our words are saying otherwise, prolonged eye contact means that there is a higher risk of letting unwanted information slip.

It’s a technique used by salesman and confidence tricksters alike, but maintaining eye contact shows that you believe what you’re saying. It’s a key

The time eventually comes in any flirty encounter where you have to start introducing substantial stakes.

The tone of a conversation should not be immediately sexual – give her some time to warm to the notion of physical contact with you. The little tactile moments can be something as simple as a high-five that you turn into a little ballroom spin or leading her to the bar with your hand resting gently on the small of her back.

These smooth out the transition between talking and kissing no end. She’s already come to terms with your touch, and, if she’s reciprocating, it’s probably a sign that things are going very much in your favour.

While playful teasing is part and parcel of flirting, avoid descending into crude insults and vulgarity, especially as a response to “I have a boyfriend” or any initial pushback which, with charm and effective questioning, you could overcome.

Reacting aggressively or being condescending won’t help you at all. It only spreads negative feeling.

Avoid stereotypes and assumptions and stick to asking open questions and learning about them.

Don’t lean in when you talk

Leaning in when you talk puts pressure on the situation, makes you seem over-keen, and gives the impression you don’t know much about personal space.

Sit back, and adopt an easy, comfortable posture. You want her to be leaning into you, not the other way round.

Don’t hesitate in your approach

Confidence is a state of decisiveness and action; of knowing what you want and exactly how to get it.

Decide to talk to a girl, walk over there, and get it done. Hesitation will not go unseen.

Too many guys will refuse to head over and talk to a girl because she’s “out of their league,” and they’ll either settle for a girl they desire less or no girl at all.

Go for what you want, and don’t play it safe. The higher you aim, the more you’ll learn, and the better you’ll end up being at talking to women.

This line of thinking also applies to the approach. If you have an idea, something you want to say to a girl you just made eye contact with across the room, try it out.

The worst thing that can happen is that you’ll make her day better and she won’t give you a phone number. You can take that fearless feeling and move on to the next girl.

Don’t listen to your negative thoughts.

The foundation of most insecurity is a negative narrative driving your actions.

If you want to break out of that headspace, you need to build a library of positive thoughts and interactions that help you break that cycle of inaction and self-doubt.

This doesn’t need to happen. There is no “league” for a woman to be out of; there is only opportunities and what you make of them. If you have a picture in your head of what a guy in “her league” looks like, and he’s completely unlike you, then that only means you will be a refreshing change of pace for her.

Or, you could be completely wrong and depriving yourself of an encounter with a great woman.

If you feel that you need help building a foundation of real confidence, get in touch at https://www.johnnycassell.com/pua-training.