Guaranteed Ways To Make Your Ex Miss You 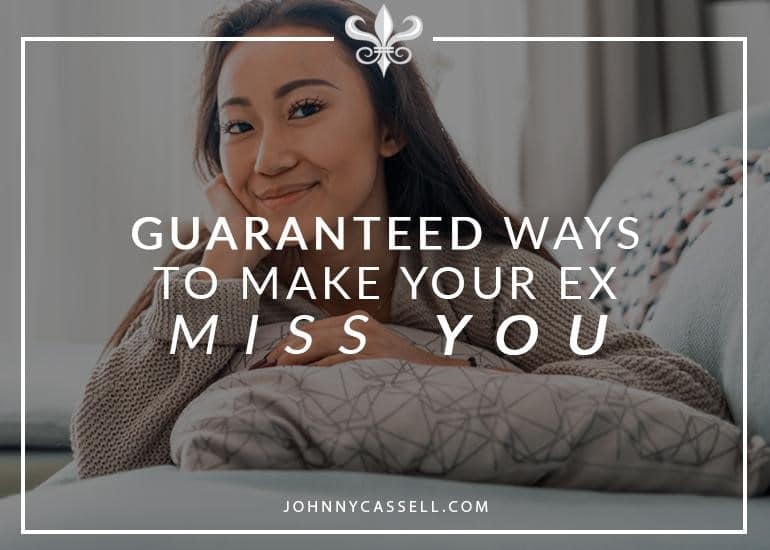 You might be having thoughts about your recent split with your boyfriend. It could be that you have a long-time ex you’d like to incorporate back into your life. If you want to reignite that spark, you’ve got to make him miss you.

Relationships trigger powerful emotional responses and memories that last far beyond the time you spent as a couple.

Although it’s sometimes the best decision to make a clean break and move on, some splits are premature. You might’ve jumped the gun on pulling the trigger. If you’re looking for a second chance, you have to make your ex reach deep into that emotional memory bank.

Moping, grovelling, and apologising is not the answer. You have to look like you’re moving on, having a great time, and pushing forward, and your ex has to see the impression you’re giving off.

Inspiring those nostalgic feelings is the most effective way of ensuring that a fresh start doesn’t feel like retreading old ground.

Not every decision takes place from the standpoint of certainty, so not all breakups stick. If you want to see your ex fight for what you have to offer and work with you to cover lost ground, you’ll need to get their attention.

I’m going to give you some game-changing tips that will have your ex sitting down for that reconciliation coffee in no time.

Begin a path of deliberate change

Self-improvement is one of the starkest reminders to an ex that not only have you left them, but you’re learning and growing. It can hurt to realise you’ve missed out on witnessing that progress.

I’m all about change. The men I’ve taught over the last 15 years have managed to transform almost every aspect of their lives. The route to it, every time, was proactive decision-making (with a little guidance from myself).

Without fail, they began to inspire increasing attraction in the women with whom they spoke in clubs and bars.

You can start making a string of drastic alterations to your lifestyle. These might involve toning up, dressing differently, or finally deciding to follow your passions if you aren’t already.

Either way, it will filter back to him, either through his friends or social media. Many guys cling to the idea of the person they miss, rather than the individual and their complexities.

When both the company and the idea of the woman they were dating are disappearing, they’ll start to feel powerful pangs of longing for you.

PRO TIP: Switch your hair up

Nothing puts a pep in a person’s step like a new hairstyle, so make a change to your ‘do.

If you’re feeling brave, go for a drastic chop. Those who are less adventurous in the hair department could try dyeing it a colour no-one would expect. Worst come to the worst, you can change it back.

Should you bump into your ex again, his jaw will hit the floor. Those few seconds of not recognising you will be alarming for him. They’ll drum home that he’s lost you or is, at least, in the process of losing you.

Be active on social media

You can be having the best time on your own, as you should be, but if you’re looking to send signals to your ex, it’s good to make them bold.

Whether you’re for it or against it, social media offers a range of platforms for broadcasting the most desirable elements of your life. Check off items on your travel bucket list, capture it on your phone, and put it out there on Instagram or similar.

It’s a guarantee that he’s checking out your social media platforms, hoping against all hopes that you won’t appear in pictures with other guys. Show the world you’re having fun.

Women who are having second thoughts about their part in a recent breakup might want to consider keeping channels open.

Friendship is unlikely to be a natural outcome of a breakup, although amicable splits do happen. But keeping open channels with your ex means you can drip-feed him information that drums home how far your life is progressing without him.

If he sees you succeeding, he’ll realise you didn’t need him in order to be complete. This will drive him wild. He’ll want to prove he deserves a role in your life again.

Another option for making an ex want you is going cold turkey. Block them on all social media, delete their number from your phone, and avoid places they’re likely to be.

Going incommunicado following a breakup creates a stark sense of absence. A noticeable, cliff-edge disappearance from someone’s life can be tough, but it often takes place for good reason.

It may be that space was all the two of you needed. Some breathing room with zero contact might reignite sparks if and when you do make contact again.

This also means refusing the temptation to accept invitations if your ex invites you to places.

Expanding your social circle a great thing to do after a breakup anyway. Socialising and having fun are the ultimate ways to pick yourself up after a split.

It’s a win-win situation for you. If your ex doesn’t start pining after you, you’re having a great time anyway. If he does, and you wanted to give your relationship another shot, then your actions are having the intended impact.

It shows that there’s a life waiting for you that doesn’t need to involve your ex – unless he steps his game up.

Subtly send messages through your friends

This tip only really works if you have mutual friends. However, letting any people in your shared friendship group know how great things are going means that he will eventually find out at some point or another.

It’s subtle, but getting filtered messages from other people about how well you’re getting on will trigger an intense fear of missing out. This will draw him back to you.

After a breakup, you have to look closely at your behaviour and that of your partner. Did you have a part to play in the split? Was it a decision the two of you made through logic and discussion or heightened emotions?

If you genuinely regret your decision, these tips will help tease a spark back to life. However, it shouldn’t have to come to that.

Clear communication and rational thinking will help both of you reach a decision that works out best for everyone in the long run. It would help if you reached a mature, two-way conclusion before either of you is in a position where one has to miss the other.

However, any steps towards self-development are a welcome breath of fresh air following a split. Building confidence and being social should play a role in the routine of any balanced, successful, and happy individual.

Let me help you help yourself tower over those self-improvement goals you keep putting off. Find out more about my virtual Impactful Connection workshops.