Making a woman smile by text 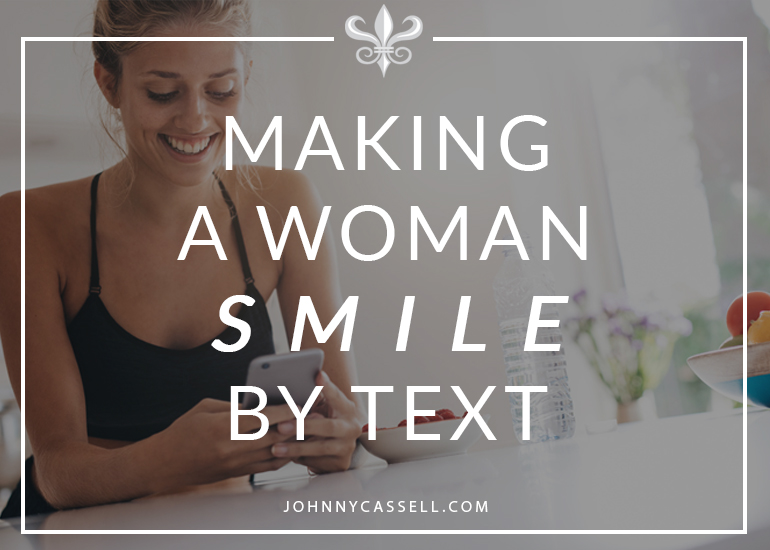 Tips to make a Woman Smile with a Text Message!

One of the most important things to learn about flirting with women, by any medium, is that it is not inherently a self-serving act.

You may be looking for seduction in the end, but flirtation is as much about building rapport, genuine connection, and stoking positive emotions as it is about getting laid.

Given that the two of you may not often be in the same room, you will be in a position where you have to set about making a girl smile through an SMS.

This a great chance to create a great connection without putting in a huge amount of effort.

Here are some of my suggestions of things to make a girl laugh over text.

GIVE HER A PERSONALISED NICKNAME

The first step to know how to make a girl happy over text is saving her name and number to your phone under a fun nickname.

I used to know a guy who would get a girl’s number, and then always open with “Hey geeky.” If a girl were of a geekier persuasion, it would immediately challenge her – are you mocking her or being affectionate?

If they weren’t geeky, it’d be a cheeky “who are you calling geeky?” response. Of course, it’s not a particularly inventive name – ‘nerdbag’ or ‘Harry Potter’ or anything unexpected is fine.

Perhaps they weren’t so nerdy, but instead more actively flirty and sexual, go for ‘tiny sex warrior’ or ‘vixenfeatures.’ If she reacts poorly to any of the names, make a little game out of choosing a new one.

It’s about getting that initial smile to kick off a conversation that should spark more of them.

When they clog up your Facebook timeline, they are nothing if not annoying, but a well-placed, genuinely funny, and largely inoffensive meme (especially involving a small animal of some kind) could be what gets you the date.
With modern messaging, it’s one of the simplest steps as to how to make a girl laugh over text.

Keep it relevant to the conversation, try to avoid the super-weird or super-political ones (there’s plenty of both) and don’t bombard her with memes to the exclusion of actual conversation.

It’s a great way to get a positive reaction from her without having to put in all that much effort.

Just scroll through Facebook. That never-ending meme avalanche could come in handy – grab the ones you like and save them to your phone. Build yourself a little library to send to girls. It’ll make the good vibes effortless.

EMOJIS ARE A MUST

Gone are the days of the emoticon, where a more fully-formed smiley was novel in its own right.

There is a vast and ever-expanding depository of emojis, and they’ve now become so ingrained in how we communicate that if you only “laugh” instead “cry laughing” at something they’ve said, it’s seen as a personal slight.

If you’re as fascinated with communication as I am, you shouldn’t be so quick to turn your nose up at emojis. They soften, and sometimes entirely replace, any message you send.

They add humour and colour to what you’re saying. And you will never fail to get a smile with the grinning poop emoji.
You won’t seem any less sophisticated for using them, and they will lighten up your interaction no end.
Again, don’t go into overkill mode. Moderate the amount of time you spend communicating with her, and make yourself valuable by rationing contact.

If you’ve gotten past menial conversation and pleasantries, as you should if you’re looking to line up a date, you could play a few conversational games in texts to make a girl smile.

Little activities like role-playing (“I’m bored. Let’s be spies.”) and little word games (trying to complete a sentence alternating between you for each word, for example) can be great ways to divert her attention and mark you out as uniquely engaging.

You want to give a sense of how fun you are in person, which she should already have from your first encounter if you have her phone number.

It’s important to maintain that spontaneity, and it’s a great way to lead the interaction and optimise attraction levels.

A subtle compliment late in the conversation is how to make a girls day 101.

Avoid overdoing it, but drop at least one or two compliments in over the course of a few days and see how it fuels the momentum of the conversation.

A grand show isn’t required. That feeling that you might like her, or think nice things about her, will put enough of a smile on her face to want to hang out with you again.

Make them genuine and personal. Don’t just throw out a “you’re beautiful”, tell her why she specifically is beautiful. You went up and asked for her number for a reason.

The best way to make a girl smile is to send her material that makes you smile as well.

It shouldn’t just be a one-man cabaret act with you trying to impress her at every turn. You should both be having fun with the interaction, otherwise where’s the motivation to hang out in real life?

Just because it’s not face-to-face doesn’t mean you have to be detached from it. Enjoyment is infectious.

If you’re clearly enjoying and making the most of the conversation, so will she. That applies whether you’re talking to a girl in a club or texting her from afar.

When you’re looking to take the step from text to sex, get in touch at www.johnnycassell.com/exclusive-training for comprehensive one-on-one escalation training.