How to make a Tinder bio for guys that works 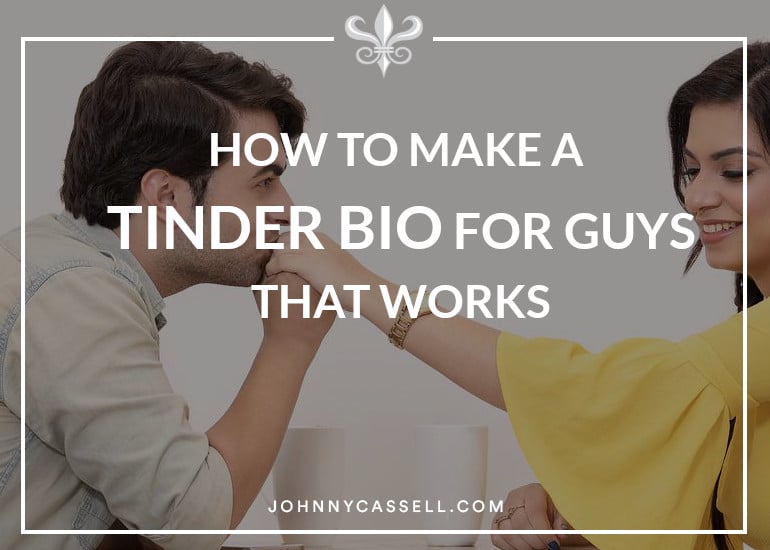 Online Dating can be hard. It’s a minefield of pictures, protocol and pretentiousness. How do you navigate through all the options, while attracting the kind of women you want? What are the rules? How do you advertise yourself truthfully without coming across as self-important? How do you even pick the right dating app to begin with?

Well, I’m going to simplify it all down to just three pieces of advice – yes, three! You only have to remember these three things when perfecting your Tinder dating profile. Most of this can be transferred to other dating apps too, but here I will be specifically using Tinder as an example. It’s the biggest dating app in terms of users and many people can relate to it. I’m going to teach you how to make your Tinder bio work for you whether it’s to get more matches, for a serious relationship or just for hook-ups.

First of all, you’ve got to remember you’re one tiny fish in an entire ocean. This means two things;

So how do you do this? You’ve got to market yourself efficiently and effectively. Think of yourself as a product and your Tinder profile as an advert. What are your 5 best traits? Put some of them in there! What makes you different to all the other guys?

There is nobody in the world exactly like you, with your unique blend of interests and abilities, and it’s your job here to show women that. If there’s some big achievement that you’re particularly proud of, show it off!

Don’t be afraid to put yourself out there. Don’t be vague. Don’t be generic. What do you like doing? What cool abilities do you have? Speak another language? Climbed a mountain? Have a third nipple? If it makes you unique, put it down.

Don’t just copy and paste your Tinder bio off Reddit. If will either be so generic it could be talking about anyone, or so farfetched you’ll have a hard time living up to it. Don’t hide behind a false façade – only advertise the goods you have.

Being brave enough to show off the things you’re proud of shows confidence, and honesty – the number one attractive traits for guys.

Now let’s do the same exercise but flip it round. What are the 5 traits you’re looking for in your perfect partner?

This is your chance to filter out any woman who won’t end up being a good match for you. Can’t imagine yourself being with a woman who can’t stand dogs? Announce your love of dogs, front and centre, and feature them in your first picture.

Tinder is not about trying to get as many matches as possible. If you’re matching with waves of women, something wrong. You could be appealing to the lowest common denominator. I always tell my students this;

You are not a mass-market product.

Visualise that dream girl and keep them in mind while setting up your profile. Don’t worry about turning women off your bio because they don’t agree with something they read – they wouldn’t have lasted long anyway! Your Tinder bio should turn away woman who wouldn’t be a match, and turn on woman who are a match. Don’t waste your time trying to attract women who wouldn’t be a match for you anyway.

Don’t hide anything that’s important to you – she’ll only find out later anyway!

All this is just an exercise – you don’t have to, and shouldn’t put every single thing on there. Make it short. Women don’t go on Tinder to read an essay. Generally, we look at the pics first and then take a look at the bio to see if the person is someone worth getting to know. If they see a wall of text, they may just retreat without even reading a word.

It can literally just be a single sentence if you want it to. But here is where you will need to be super specific, which brings us on to our next point…

Whatever you think makes you unique, and whatever traits you’re looking for in a woman, be specific about it. Go as deep as you can reasonably go.

For example, you like music? Great, so does every human being on the planet. You may as well put that you have two eyes and two ears. What are your favourite musical artists? What specific TV shows and films do you like to watch? This can instantly create a unique connection, especially if it’s a particularly obscure or polarising title. Again, if they don’t like it, they can save you the bother of finding out later by swiping themselves out of the picture.

If you’re a naturally funny guy, or can get away with a bit of humour, do it! But don’t just tell her you can make her laugh – actually make her laugh! Try to include a snippet of your kind of humour; whether it’s random, dark, cute, or clever. Try and put something you think your ideal woman would laugh at. If they don’t laugh, they’re not for you anyway.

On the other side of that, if you find yourself sitting there for hours staring at the Tinder bio trying to think of something funny to say, don’t try so hard. If nothing comes, best not to force it. You’ll end up with something that’s unfunny and not representative of your own humour. If your Tinder bio is full of hilarious jokes you found on the internet, a woman may swipe right hoping to see this side of you in person – and only end up being disappointed.

Remember that list of 5 traits that you just wrote down? Here’s where you can really be as specific as you want. Do you like brunettes with blue eyes? Someone who paints? A snowboarder? The traits you’re looking for in a woman can be advertised here clearly and specifically.

If you’re just looking for a hook-up, there’s no harm in saying so. You’ll be saving everybody’s time, and besides, you know what you want, and are honest. That’s attractive. Equally, if you’re searching for The One, it’s important to put that here too. Even though Tinder is often used for hook-ups and quick flings, many people have found true love and married because of the app, so don’t be disheartened if this is what you’re looking for.

Positive language is always more effective and attractive than negative language. Even if you feel strongly about an issue and the woman you are trying to attract would agree with you, filling your Tinder bio with negativity and anger can turn any woman off. Don’t use this as a soap box to vent your frustration on a particular injustice.

Political point of view important to you? If two people have extreme opposing political views, studies repeatedly show it often doesn’t work out in the long run, so feel free to put them on here as another strong filter. But there’s something very important to keep in mind; keep it positive! Avoid using the words and names of political beliefs that you disagree with, because the algorithm could still show your profile to other people using those names in their bio, whether they’re announcing their love for them or complaining about them.

The algorithm can’t tell the difference between ‘Fuck the Tories’ and ‘Tory voter and proud’.

So, instead just use the names of the political views you do agree with and want to be associated with, if they are important to you.

Use positive words to advertise positive traits you have, that your dream woman would like, and that you’re looking for. For example; kind, fun, amazing, laid-back. Don’t focus too much on physical traits either. If you list 5 things you want in a woman and they’re all synonyms for beautiful, she may think you’d only want her for that and could swipe left – even if she is beautiful!

Can’t stand dogs? I’m sure I don’t need to tell you not to put ‘NO DOGS’ in your dating profile, for obvious reasons! Instead, say you prefer the company of human beings, or that you’re more of a cat person. If you use this positive language, you may attract a possible match that does happen to like dogs, rather than turn away a woman who may actually agree with you but is appalled by your attitude.

If you tell women on your bio not to swipe right if she’s ugly or ordinary, it just comes across as mean and unnecessary. It only achieves one thing, and that’s putting down women to make yourself feel better. But what if you do in fact have high standards for yourself? Did you know that you can basically say the same thing, but in a way that actually makes you seem more attractive? Try writing something like the following example;

This is basically saying the same thing, but does so in a way that doesn’t belittle women. You will instead be seen as confident and knowing what you want – attractive traits.

And finally, you will be surprised at how effective a turn off bad grammar can be. It comes across as uneducated and incoherent, and a woman will expect the same in person. I can’t tell you the amount of times I’ve seen an otherwise attractive dating profile ruined by bad spelling and punctuation.

With auto correct, there’s no excuse these days for having a Tinder bio look like it was written in the 2000’s.

This positivity goes for photos too – Smile! Don’t brood in the corner with low lighting or have intense facial expressions. I’ve focused more on the bio in this article, but if you want more tips about other aspects of online dating profiles, click here.

And with these tips, I hope you can get out there and attract the kind of woman you want, whether it’s short term, long term, or marriage. Whatever you end up writing, just ask yourself; is it brave? Is it specific? Is it positive? If the answer is yes, then you’re on the right path to finding happiness. Good luck!

If you require further advice on online dating, look no further than the wealth of articles on my website.