How To Attract Younger Women 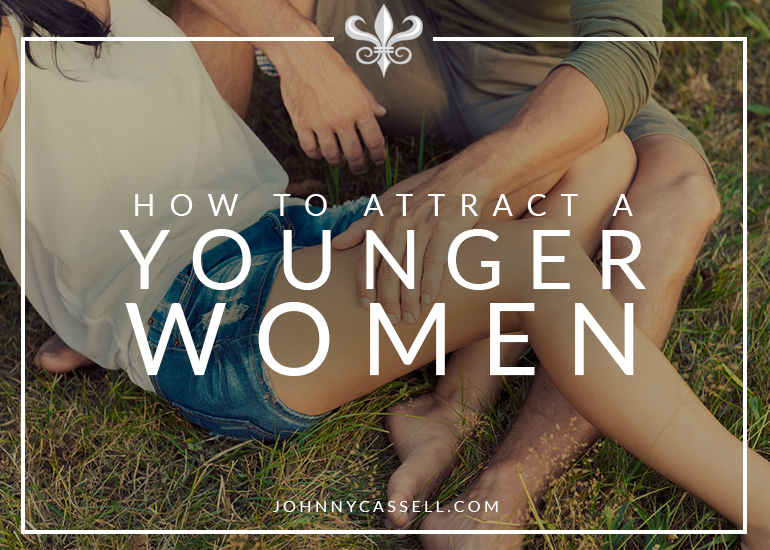 Over the years, it has not been uncommon to see walking Tesco carrier bags like Mick Jagger, Steve Tyler and *gulp* Donald Trump landing supermodels half their age. Older men dating younger women seems restricted to the tabloids.

Sure, being multi-million/billionaires helps, but securing yourself a younger, more vivacious woman than your more advanced years would suggest was possible is, in fact, exactly that.

So why do girls like older guys? Old is not dead, and the advanced social wisdom, life experience, financial and professional success and intelligence that ageing can give you a significant boost over your juniors when dating younger women – if you use them right.

DO YOU REALLY WANT TO DATE YOUNGER WOMEN?

The answer, quite frankly, is yes. Why do older men like younger women? They are more sexually motivated, generally healthier and far better at having fun and socially engaging with the world. There’s less likely to be complicating factors like kids/divorces entering considerations, and also a higher likelihood that they will be considering these if they are thinking about older men.

And younger women: how to get an older guy to like you? Be interesting and full of life, show your drive and exhibit how well you can fit in to his life – he’s had maybe ten/twenty more years to settle in his ways. Show him you what you can teach him about feeling young – and be open to what he can teach you.

You don’t need to be Donald Trump (in fact, please don’t be. Ever.) but stability is a strong factor in what will make you attractive when dating a younger woman. Not even on a financial level, but staying calm during the many dramas that can occur during a younger person’s life will add instant appeal to you over a younger man.

Where you see older man/younger woman combinations strolling around, it’s likely to be because he was able to provide her a much more relaxed lifestyle than she is used to. Be an immovable object and use your experience to show how you handle situations. Be the one that shows the answer to the question ‘why do I like older men?’

You’ve spent a far longer time in the world, interacting with people and gathering experience. You’re also probably from a more chivalrous era where you had to be a lot more traditional in your approaches. Hold open car doors, walk on the street side of the pavement. offer to take her coat. Dress the part and brush up on your class and your etiquette.

You’ll have an edge on this side of charming a woman over anyone over whom you have two decades. There’s a reason girls are so often attracted to older

My 7 Day Course centres on building your confidence so that you can attract all types of women whatever you look like. However, you will have ample competition from men the same age and a girl is unlikely to go to bed with someone who looks like they’re melting. You don’t have to look like Keanu Reeves, but if you want to end up dating a younger woman make sure she knows you’re not going to go into cardiac arrest during the act of coitus.

Join a gym, go on walks, make sure you’re active for at least half an hour a day. This will also keep your confidence up, regardless of how ripped you appear.

Why do men like younger women? Because they’re exciting. They have vitality and direction. And they can lead to older folks stammering themselves into a corner and appearing creepy. And boring.

Don’t yammer on about divorces or back pain or life stories, don’t pester them with phone calls and let her come to you. Limit your time together to minimise risk of a dependent attachment.

The same way you need to give any woman space to come to you applies equally if  not more so to younger women dating older men. Ultimately, your approach should be no different to that of approaching any women – in fact, thinking of it that way should be your approach. If you use your age as a well of charisma and life experience, it’s just another strength you have as part of talking to women.

This also means being interested in her. Listen well, speak little and when you do speak, make it worth it. Dating a younger woman doesn’t have to be any different. Let her make her choices and live her life.

For a sound period before making a move, keep a safe and respectful distance

TAKE THE LEAD AT THE RIGHT TIME

As the elder in the situation, you’re also mostly responsible for setting up the atmosphere. If you’re well-to-do, find somewhere more upmarket, quiet and classy. If you’ve got your own home, learn to cook a rare dish and wheel it out when she’s over. Go and see a re-run of an old movie you both like at an indie cinema. Make the most of showing her a relaxed, intimate time in an ambient setting.

Once you have charmed her, show intent, purpose and unwavering confidence. If you’ve got her to the stage of a one-on-one date in a lowly lit environment, she’s probably wondering how to seduce an older man herself. She doesn’t see it as old guy young girl – she sees it as two people in a room. Capitalise on it. If you’ve laid out the groundwork as above you should have as natural an embrace as you’ve ever had.

Be a shining example of the type of old men young women want to be with. Older men, younger women, it’s all the same – be all you can be, stay healthy, listen well and be a gentleman. You’d be surprised how far being genuine and polite will get you in a world where she expects exaggerated machismo and puffed chests.

Find out more about the fineries of talking to and keeping women here.