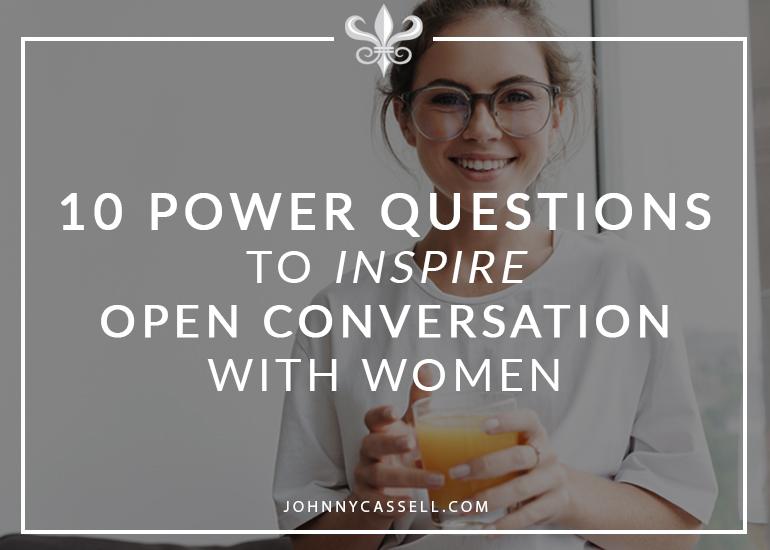 Open questions have played a crucial role in my dating workshops for over 15 years. They’re a building block for compelling conversations that help women feel more comfortable opening up to you.

This type of questioning elicits a detailed answer, rather than a yes or no. A why, rather than a what. These allow you to build rapport, challenge assumptions, and stimulate emotional responses.

A recent study of closed and open questions on a web survey found that participants gave far greater detail when answering open-ended questions that closed ones.

I also teach my students about the importance of finding out a woman’s values when you’re on a date. Physical attraction is important, but you need to know that your core values align with the woman sitting across the table.

For this reason, vaguely meandering questions that lead nowhere will not cut it. You have to gauge how a potential long-term partner views the world, how they treat people, and the world they come from.

Human beings aren’t just a list of characteristics and features. We all have unique perspectives, and great relationships grow when those worldviews line up.

But you won’t get to the truth without the right questions. I’ve lined up ten questions that will help lubricate the conversation on any date. They’re also not too heavy but will take the discussion to deeper places.

“If you knew the world was ending tomorrow, how would you spend your last 24 hours? And how would it make you feel?”

It’s important to know what a potential partner would do with the time they consider precious.

Would they do something for themselves? Do something crazy and adventurous? Spend quiet time with a person they love? Try and change the world?

There’s no right answer, but this question will steer the conversation in exciting directions and give you a picture of what she really holds dear.

This is a double question of sorts because vivid feelings are vital to its impact.

If she’s in the mindset of spending truly special time with someone, her emotions while considering the question will create a nostalgic sensation that keeps her coming back to the moment after you’ve parted ways for the evening.

“Okay, so you can have a chip in your brain that makes you the world’s greatest at anything you want. What would you pick?”

This question can go in pretty much any direction she takes it.

Humour, sexually charged exchanges, and aspirations can fly across the table and paint a real picture of a woman’s ambitions or intended impact on the world.

Her answer will also point towards her personality. She may suggest, for example, that she’d love to speak every language fluently. This would suggest she’s into travel, highly social, and concerned with effective communication. It’d be a good sign that she’s a lot of fun.

She might want to be the world’s greatest doctor, showing a caring nature and precise intelligence. Or have the most beautiful voice imaginable, creating a window into possible creative passions or an appreciation for good music.

This question allows your date to paint a vivid picture of what she’d like to achieve at the peak of her powers.

Name one thing you’ve done that you can never repeat.

This question is an amusing double entendre, opening the

possibly talk about in polite company) and stories of unique experiences they’ve had in their past.

This is a transportive question, as with the first of my recommendations. It’ll take a woman’s consciousness back to an exciting time in her life. This will unconsciously draw associations between that buzz and her time with you.

At the very least, you’ll get an engaging anecdote, likely involving travel.

This question is a huge win. Most people with pets

are crazy about them, and they’ll speak of them like family. They’ll get highly animated about the subject.

Asking about their pet’s personality shows that you think of their furry/scaly companions as little people too. As corny as it sounds, it showcases a sensitive side.

It also gives them a platform on which to showcase their empathy. Sooner or later, you’ll find the woman with whom you want to start a family. This question is a subtle test of their caring and nurturing qualities.

If she doesn’t have pets, you nudge the conversation on with “What’s the weirdest pet you’d ever want to own?” or “What’s the strangest animal you’ve ever held?”

The simple act of bringing animals into the conversation will win you serious brownie points with most women you date.

“£3 billion lands in your bank account, with a note giving you 24 hours to spend it. How do you spend it?”

Money can bring out the best and worst in people. It’s good to know that whoever you’re sharing your life with is responsible, kind-hearted, and knows a good time when she sees it.

This question will reveal where her priorities lie and where your future could lie too.

You can get a sense of what a woman feels she deserves, how familiar she is with the high life, and whether she’s charitable.

While working through the answer will feel fun and fanciful, the question itself can show more about a person than they realise.

“What would be your dream place to spend three months?”

This question demonstrates the type of culture a woman would like to take in and her readiness to immerse herself in new experiences.

By asking this while you’re sitting together, you’re creating a picture of places where you could go. You’ll also get a representation of how adventurous a woman is – if her answer is Crawley, it might raise an eyebrow.

Couples should set goals and have a list of places to travel, so why not start compiling it on that first date and work towards it.

” What moment in your life would you submit to You’ve Been Framed?”

Everyone has a moment of crippling embarrassment that makes for a fantastic cocktail party story.

Putting it this way removes any stigma about the moment and opens it up for levity and the mutual sharing of mortifying moments.

This is a fantastic one for easing the atmosphere (opening with this one is a bold gambit, but you could certainly try it). It’d be best to avoid descending too far into vivid descriptions of frat boy shenanigans, but it’ll be good for a few fun anecdotes back and forth.

You’ll already feel like you know each other a bit better.

“Which celebrity would you switch lives with?”

This question is a thinly-veiled way of asking: What is your ideal life?

Also, does she choose a celebrity with a lot of money? A reality star? A brilliant mind who’s made a significant impact on the world through science? Nicolas Cage? Whoever it is, this gives some indication of what else she’d like to be achieving in life.

It also creates room for banter, where you can pick a completely different celebrity and dig your heels in about why they have a better life.

“What would you reveal about yourself to screw up a job interview?”

This is such a great question. You get to roleplay a little, but you also get to peek into a woman’s naughty side.

It creates avenues for ridiculous hyperbole as well as “truth-or-dare” style boundary-breaking that makes for great rapport.

They might bring up a regrettable tattoo, a story from a hen night, misdeeds at school – whatever it is, you’ll have a range of ways to drill down on the question and find out more.

“When was the last time you felt excitement?”

This question can make an appearance later on in the evening, as it’s quite sensual.

The use of “felt” and “excitement” together create a highly visceral experience through language. It’s subtle, but a woman will start thinking about their last great night and associate it with you.

It also suggests that you’re capable of providing more excitement before the night is up. It’s a powerful question.

Open questions are an effective method for making sure the woman you’re dating is talking more than you.

It also helps you engage her mind, capture her imagination, and learn about her values. Effective questioning is a sure-fire route to a successful date.

To learn about the finer aspects of dating, check out my virtual Impactful Connection workshops.