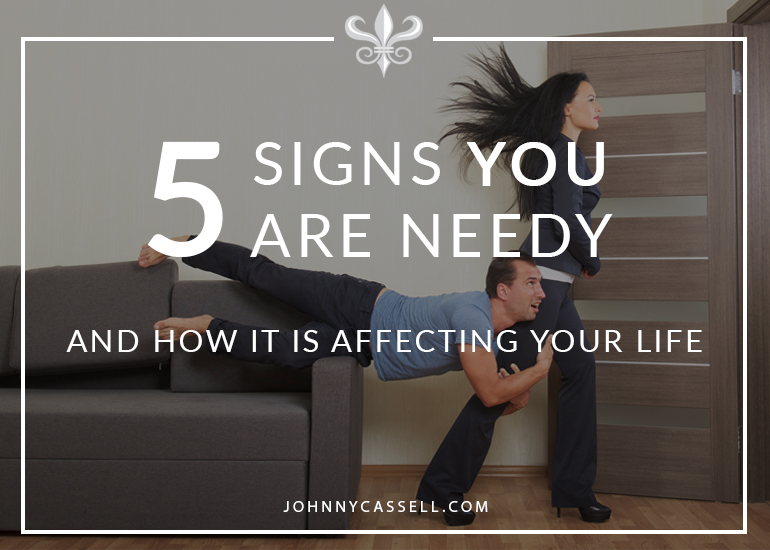 Signs of Being Needy

Every relationship has needs. Whatever connection you have with a girl, it will likely be a network of requirements and desires that both of you work to fulfill, both on individual and collective levels.

There is a firm line to be drawn, however, between expressing and fulfilling each others’ needs and being flat out needy. Neediness involves being demanding and insecure and requiring constant attention.

It gives whoever you’re needy with, whether it be an employer, mates, or a girlfriend, all of the power in your relationship. This power can include vetoing your decisions or manipulating you.

Men are often under the illusion that women are the only needy ones in relationships, but it couldn’t be further from the truth.

Needy men often don’t catch the signs of their behaviour until it’s too late. It’s likely they way they act drives a wedge between them and the one they love.

Being emotionally needy is deeply unattractive, and it has ramifications outside of the relationship itself, especially when social media is involved, but more on that later. It’s unhealthy for you as well as for her.

Here are a few warning signals that you’re turning into the needy boyfriend rather than the boyfriend she needs.

• You are all over her social media
• You haven’t seen your friends in ages
• You keep making up reasons the two of you should hang out, and you get upset if you don’t
• Spoiling her has become the norm
• You argue with her a lot

These seem like pretty obvious things to avoid, but the sheer volume of guys that are needy yet oblivious to their actions is troubling. If it’s you, you have to be honest with yourself and work at it.

You’re all over her social media

You may regularly scroll past guys who always post soppy statuses or tweets about the women they’re dating. But you may well be doing the same.

If you’re trawling through old photos just to ‘like’ them, constantly popping up on her wall, or posting a picture of the two of you every five minutes, you’re emotionally needy. Your insecurity is leading you to show everyone on her profile she’s yours.

Don’t confuse it with being romantic. You’re not letting her know how you really feel if it’s in comment form. You’re worried that if you don’t keep reminding her you’re there, she’ll forget you.

Your woman and her friends list will also be painfully aware of your clinginess.

There’s no harm in posting a status celebrating her birthday, or your anniversary. Simply be wary of the quantity and nature of the public messages about your relationship together.

What lives online, lives online forever, and you could get yourself a pretty bad reputation as a needy person.

This neediness will affect your current and future relationships with women.

You haven’t seen your friends in ages

This is important. Romantic relationships are an important part of life. I wouldn’t do what I do if I believed otherwise. However, to be healthy they have to be part of a balanced lifestyle that includes a broad range of other connections and responsibilities as well. Including your friends.

If your girlfriend is the only person you see, then you have an unhealthy dependency on your time with her.

However serious the relationship, you need to set regular aside some time for your friends and family.

Unless the two of you are independent, functioning humans who have full lives without each other, your relationship is not likely to succeed. Make sure you both have your own activities and people.

If you’re don’t have much of a life outside of your romantic relationship, and you’re okay with that, there’s a slim chance are you don’t know the answer to the question ‘what does being needy mean?’

Most girls you date will be temporary flashes in the pan. If you plow all of your time and effort into hanging out with them, you will find that the relationship rapidly loses its novelty and you have no one to turn to once its over.

Keep everything in perspective and make time for the people you care about.

You keep making up reasons the two of you should hang out, and you get upset if you don’t

This feeds into the last point: Your time with this girl should not be the most crucial thing in your world, and you should not be putting pressure on her to take the same attitude as you.

If you’re emotionally blackmailing her to spend time with you, or you invite her over every evening and have a go at her when she can’t, you’re probably placing the emphasis on someone, anyone, being there, rather than who she actually is as a person.

Eventually, she is going to see hanging out with you as a chore.

This will damage the way you relate to people in the long run if the way you can only show them your needs in the relationship by trying to wheedle as much as you can out of them. Being in this habit stops you being forthright and upfront with people.

This includes pestering her for or blackmailing her into sex. It’s the same principle. If she doesn’t want to, it’s more likely something you’re leaving out. She doesn’t owe you wanting to hang out or more.

Spoiling her has become the norm

Spoiling someone is negative whether it’s for a child or a lover. Seeming like you’re trying to purchase someone’s affection will drive away the right girl and push you into the arms of the materialistic ones.

If you’re buying someone gifts out of insecurity, they’re not really gifts.

You argue with her a lot

Neediness isn’t just smothering someone. Arguing for argument’s sake – when you’re simply trying to reassert your confidence by creating an argument for no reason – is also a form of neediness.

If your relationship turns you into a needlessly argumentative person, this will permanently damage the way you form connections in future.

When arguments are always flaring up, either you’re both too different or one of you is trying to win them for the sake of it. Notice it and change it.

It can take a lot of honesty to face up to these issues, but if you tone them down you will find yourself far happier in a relationship.