Emojis For Flirting: What They Mean And How To Use Them 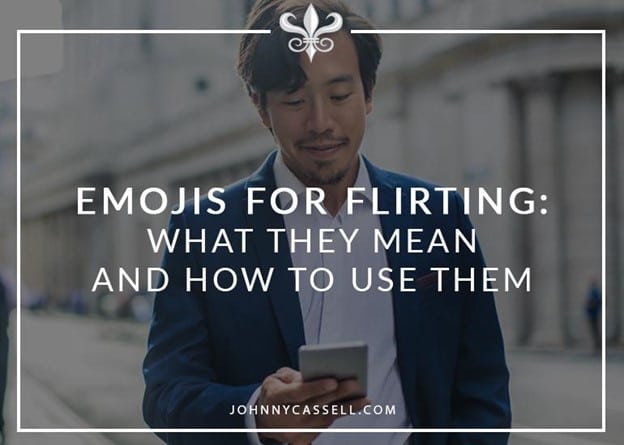 Emojis mean that our text messages are now much more than about the words we use, especially in the world of dating. These little images set a tone and atmosphere for the conversation, provide levity, and demonstrate intent.

At first, it was easy to shrug off emojis as a kids’ game. However, the “face with tears of joy” emoji (😂) entered the Oxford Dictionary in 2015.

The minds behind the dictionary only include words or, indeed, emojis after repeated use through written materials. They compile a corpus of written texts and transcribed conversations to determine the symbols people use to communicate right here and now.

So the presence of a little yellow face in the dictionary, laughing until it’s crying, is fascinating. It’s also a sign of the humble emoji’s power in conveying moods and sending signals to people for whom we feel sexual attraction.

Every tool needs an instruction manual. Knowing how to interpret and send emojis in flirty texts will mean that you can more easily maintain attractive through follow-up texts and increase sexual tension without even being in the room.

Don’t only take my word for it, though: The data doesn’t lie. A 2019 review in PLoS One found that emojis help people maintain relationships beyond initial contact and more often progress to sexual contact. Emojis are useful connectors when put to use in the right way.

Let me guide you through the new world of emojis for texting and dating apps.

Use this emoji to convey sincere appreciation and affection after a compliment.

This is more than just a standard kiss via an emoji. Take a closer look – this little guy’s blushing.

The power of emojis lies in their closeness to everyday expressions of immediate feelings. Kissing Face With Closed Eyes could be a way for someone to show complete adoration or gratitude for something sweet, such as a compliment or gift.

This is not a “sexy” emoji. It’s a super sentimental message to send when you’re maybe falling for another person or showing genuine appreciation for their actions or words.

If you’re getting sexual vibes from the chat, it’s best to steer clear of using this one.

This emoji conveys a cheeky, bashful gesture. You’d usually drop it in after an embarrassing story or a compliment that makes you blush.

It’s a great builder of rapport and a clear signal that the sender wants to elicit a laugh. It’s also a sign of humility following a compliment as if to say, “Me? No… really?”

See No Evil is one of the most commonly used emojis out there, and it’s easy to see why – it’s low-key, flirtatious, and funny.

It’s also a way to poke fun at the person you’re texting if they’ve said something you can twist into a joke.

Use this emoji to create an atmosphere of sexy fun, for example, after a risque joke.

I tell all students looking to maintain connections with women via text message to keep it light and fun. Some people don’t type that creatively and might struggle to generate excitement and laughter through written language alone.

However, this emoji has taken the pressure off people who struggle with this. It’s a lot easier to let people know when you’re being cheeky and messing around by sticking one of these at the end of a message.

There’s a non-tongue version of this emoji, which tells you everything you need to know about the intent of someone who’s using it. It’s very often used to stoke sexual tension and imbue a sense of playfulness and adventure.

Use this emoji to show that you’re impressed or in awe of the person you’re texting or something they show you.

Everybody you feel attracted to has qualities you admire. Our body language gives this away in person, but texting denies us that giveaway – until now.

This one is less about bestowing general warmth and affection (although people may well use it that way) and more about reacting to a particular feature, object, or song.

You may not even be showing appreciation for them directly, but something they enjoy. If the person you’re texting mentions a band or TV show you love, for example, this would be the way to respond.

It gets a fair amount of use in a sarcastic context, so always read around the emoji for cues. However, it’s a good sign that they’re impressed with what you’re showing them and into the same lifestyle as you.

If you’ve picked up on innuendos or fancy making a few yourself, this is the emoji to use. Be warned: Overusing it can put people off.

Sexy puns and innuendos are an integral part of both the Carry On movies and dating in general.

While it can sometimes be more fun to act outraged or offended at risque humour, this is a simple way to let the person you’re texting know that you hear their signals loud and clear – and you’re 100% on board.

You can also use it to crank up suspense ahead of surprise dates or to spark mystery and keep them on their toes.

However, using it too much makes it lose its impact. It’s a great connector to point out innuendos, but leaving some ambiguity to the sexual overtones is as erotically charged.

Sex. This emoji means sex. Send Smiling Face With Halo if you’ve got one thing on the brain.

The official definition of this on Emojipedia suggests that this emoji represents prayers, angels, and blessings. In my 15 years of guiding men through dating on and offline, I can say, with confidence, that the truth is far dirtier when this enters a text thread.

Most of the time, this is a clear signal that you have devilish intentions, just delivered in a coy, suggestive way. For example, if the person you’re texting says, “that’s just because you’re thinking about me naked,” and you reply with 😇, it’s on.

This emoji is an opener – an off-handed How You Doin’ in emoji form.

Smirking/Whimsical Face is the emoji equivalent of leaning against a lamppost in a leather jacket, chewing gum.

It’s a knowingly flirty greeting that opens the conversation on a light but mysterious tone.

This emoji is a goodnight kiss. Use it when you’re a bit more comfortable and texting each other in the wee hours of the morning.

A little tenderness in a text message never hurt anyone. If you’re winding down for the day, this can be a simple sign-off to her saying goodnight. It’s a peck on the cheek, delivered via SMS.

Too many can be a bit smothery, but you know that she’s thinking about you as more than just a casual fling if you get a stream of these in your inbox.

This emoji shows a warm reception to a compliment. Imagine you tell a woman you like her dress, and she gives you a twirl – this is the emoji equivalent.

When people use emojis, they do it to express feelings they may usually not put into words but would convey with a “hmm” or an “aww”, which can feel disingenuous when it’s typed out. Receiving a compliment is one of those natural reactions that fall into this category.

In short: You’ve made her feel like a real woman and a special person.

This emoji is a traffic-light level sign that the person you’re texting is up for some sexual intimacy.

For the same reason that some women wear devil horns while on hen parties, it gives off distinct naughtiness and innocence. It’s a coy smile across the bar. Whatever you’re doing in the rest of your messages is working.

You can also send this when you’re taking the texting into sexting territory.

Emojis now play a central role in text messaging and add an extra element of atmosphere and fun. However, they’re for nothing without a striking first impression to build off.

If you overdo it with emojis, it’ll make you look like you can’t use words to inspire feelings, and it might be a turnoff. Use them sparingly but effectively.

Whether it’s through a must-click online dating profile or comfortable posture and an engaging opener in person, you’ve got to make sure you leave a sense of intrigue around you after the conversation is over.

Texting is always just a precursor to the next date. Enjoy your time cranking up the tension with emoji-laden messages, sure, but set up another time to hang out and learn about each other face-to-face.