Signs A Woman Likes You: How To Handle An Approach 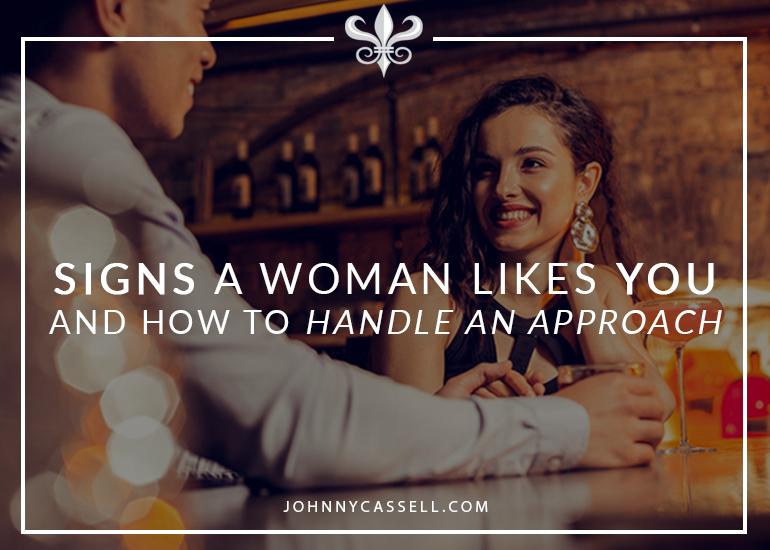 I talk a lot on this site about how to approach women – an essential skill, no doubt. However, much of your success when talking to women depends on reading their signals of attraction.

It’s also about handling with panache the occasions on which women approach you. Sometimes we can become so focused on refining and perfecting our own approach that the idea of a person we find attractive talking to us doesn’t even come to mind.

Then it happens, and because we weren’t ready for it – or worse, because we don’t even realise it’s happening – we don’t make the most of it.

Given how much attention attractive women receive in bars and clubs, they’re probably not too likely to strike up a random conversation with you unless they’re interested. Take note when she pays attention to you. It may be a signal.

Of course, you can’t assume that every woman who speaks to you fancies you. She may have a perfectly practical need to communicate. The trick to working out her intent is deciphering what she says and why she’s choosing to say it to you.

Today, I’m going to share how to use your social awareness and people skills to turn any encounter with a woman who strikes up conversation into a potential date.

Signs a woman likes you

Firstly, there’ll be universal signs that a woman finds you attractive. While they may not actively say it using words, their body language will give away plenty about the way they perceive you.

Eye contact is a crucial giveaway. If a woman makes eye contact with you from across the room, but doesn’t decide to approach you, it’s likely you’ve piqued her interest but need to take a lead on starting the interaction.

Even if she looks away quickly, then looks back, she may just be shy. It’s an indicator you’ve appeared on her radar as a guy with whom she’d like to talk.

If you’re already in conversation, she may lean in towards you, point her feet towards you, or try to reposition herself closer to you. They’re subtle signs that she’s curious and wants to learn more about you.

You may find that she deliberately brushes against your hand or the back of your arm. It’s an invitation to respond in kind and a sign that she’s comfortable with physical contact. She may just be outgoing, but it’s a sign of comfort around you.

She wants you to make a move.

What to do when a woman approaches you

If a woman warns you as you go to sit that a bench has wet paint on it and she’s wearing overalls, holding a dripping paintbrush, she’s probably not flirting with you.

However, a woman who’s just crossed a room to ask you the time, she probably is. If she then giggles and strokes your arm when you tell her it’s five-thirty, you’ve got a glaring neon sign that she’s into you.

Ask yourself: Is she just making conversation, or is there a reason she’s trying to talk to you that isn’t being communicated by the content of her speech? Is there a subtext to what she’s saying?

Does she really think you’re more likely to know where the nearest train station is than the Google app on her phone, or is she just looking for a way to break the ice?

What to say when a woman shows interest

If a woman has come up to you to talk, don’t blow the opportunity by taking what she says too literally. “Sorry, I haven’t got the time…” What were you thinking? Avoid blocking the path to further conversation.

Instead, reply positively, even if you can’t help her with what she asked. Be sure to tag a question of your own onto your answer. This will keep the exchange going and open up the conversation to wider possibilities and new topics.

‘I can find out where the station is for you, no problem. Where do you need to get to?

This will allow for follow-up questions:

‘Oh, really? What’s happening at [her destination] then?’.

Now you’re discussing her plans for the rest of the night or weekend – the perfect opening for you to exchange numbers and make plans together before she leaves. Create opportunities by leading the interaction in a positive, exciting direction.

How to make the most of mixed signals

No two people are the same. The same signal from two different women might mean completely different things, and that’s fine.

If a woman only wants directions or the time, she’ll say so and excuse herself from the conversation. However, if she’d rather stay and talk, you should create the opportunity for her to remain in the conversation by showing interest and keeping your interaction moving.

Even if she had no intention of instigating a full-fledged conversation with you, there’s no reason you can’t change her mind since you’re already talking.

A good conversation is like a rally in tennis. There should be a fairly equal back and forth. Of course, this will vary by personality or mood; some people like to talk more, and others are good listeners.

You need to become good at both, and, more importantly, know when each should come into play.

The power of active listening

With a little practice, you’ll become skilled at active listening. This skill plays a major role in the success of elite salesmen, negotiators, counsellors, and anyone who excels at building rapport and trust to engage with people.

Active listening involves using people’s responses to prompt your own. This steers the conversation into territory that allows you to learn more about a person and their interesting characteristics.

You should combine follow up questions with statements and observations of your own relating to what she said so that each conversation doesn’t feel like an interrogation. You also don’t want to come off as all questions, no substance.

For example, if she’s leaving the bar to meet friends, ask her where she knows them from.

Whether you’re drilling down on her work, her sports team, her ideals, or her passions, it’s likely to prompt further questions organically. This will get her to open up to you about her passions and interests and show that you’re a genuinely interested listener.

These exchanges also provide you the chance to mirror her responses and reveal a little about yourself, allowing the two of you to discover common ground.

With practice, you’ll be able to turn any interaction into a prolonged and engaging interaction with date potential.

You can use this technique even if you were the one who approached her. You may need to work a little harder in the beginning to get her to respond, but she will – so long as you make a striking first impression.

These sorts of conversational techniques don’t only work in dating. They can enrich any part of your life.

Whether you’re communicating at work, socialising at parties where you hardly know anyone, professionally networking, or making friends in a new town, the list of situations in which active listening adds value is virtually endless.

This approach to conversation is at the core of what professional networkers, celebrities and socialites call ‘working the room’. It’s key to making the most of the opportunity for enthralling conversation with a woman when she approaches you

In short, always keep avenues of conversation open when a desirable woman approaches you to talk. Assume that she may be interested until she gives you a reason to think otherwise, and act accordingly. Don’t waste opportunities.

Once she’s started talking to you and you’ve begun to lead the conversation to a place where you feel a connection, take it to the next level and set up a date.

If she doesn’t have plans for the rest of the evening, you could move on to the next place together. If you met on the train home from work, you could disembark together and go for coffee.

Whatever the circumstances, make your intentions clear and ask her to spend some time with you.

Since she’s already enjoyed your undivided attention and expert conversational skills, there should be no doubt in her mind that it’ll be time well spent.

Learn to master the intricacies of seduction through my Impactful Connection workshops.